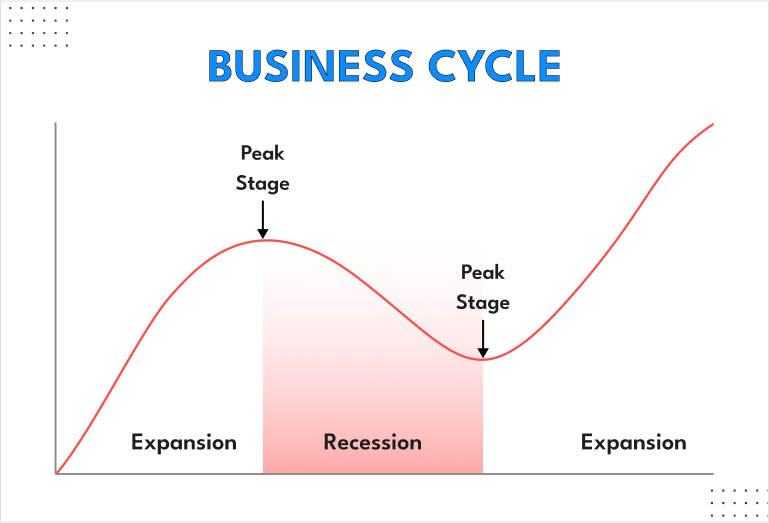 The economy of every country undergoes periodic fluctuations. Although they are repetitive, it is impossible to avoid them.

Many factors cause these fluctuations, such as GDP, employment, consumer spending, real income, production, and aggregate output.

Smart business owners and policymakers study these economic cycles and patterns to help them make informed financial decisions. Preparing for these periodic fluctuations ensures your business thrives even in unstable economic conditions.

This article explains the workings and stages of the business cycle.

Definition and Example of the Business Cycle

The business cycle, otherwise known as the economic cycle or trade cycle, is a term that depicts the increase or decrease in economic activities involving production, trade, and consumption over time.

Business cycles help measure the downward and upward movement of the amount of productivity of businesses, employees, and consumers alongside the growth cycle of the economy over time.

As the Gross Domestic Product (GDP) fluctuates around its natural long-term growth rate, economic cycles help explain the expansion and contraction phenomena that characterize an economy over time.

Example of the Business Cycle

Every business cycle must have passed at least a single boom and a single contraction sequentially.

In recent decades, major economies and businesses have increased their production level. It has led to the need for more employees and has translated to less spending money. As a result, companies make more profits that help them focus on growth.

In the reverse case, when the economy is slow, there is a decline in the number of employees needed, which translates to a decrease in consumer spending. As a result, companies have less focus on growth.

The United States as a Case Study

In the United States, for example, the end and start of a business cycle are defined and measured by the National Bureau of Economic Research (NBER), a non-profit business cycle dating committee.

The NBER uses quarterly GDP growth rates to determine the current business or economic cycle. It waits till it gets enough economic data to prevent a situation where it would have to make revisions to the business cycle chronology.

Businesses are affected by the expansion and contraction of the economy as they also go through their own distinct set of ups and downs in their trade cycle.

This situation puts the management of the business in a position to devise strategic financial decisions to deal with these challenges head-on. Understanding the time of the business cycle helps businesses make correct investment decisions.

6 Stages of the Business Cycle

The business cycle illustrates how a nation's aggregate economy moves over time, showing ups and downs.

Business cycles are characterized by economic expansions followed by sustained periods of economic recessions. In a business cycle diagram, the straight line is the steady growth line, and every business cycle moves about the line.

The first stage in every business cycle is the expansion phase. Expansion begins when there is a visible increase in positive economic indicators such as employment, demand, and supply of goods and services, wages, profits, personal income, national income, and output.

Economic expansion is a period of relative growth in a nation's economy. During this phase, productivity increases, as visible as an upward movement in the yield curve.

The economic recovery phase is another name for the expansion stage. It occurs after an economy has been through a contraction for an extended period.

This phase is characterized by debtors paying off their debts on time, high velocity of money supply, and high investments. It continues as long as the economic conditions remain favorable.

The goal of the federal reserve bank during the expansion phase is to keep inflation around 2% for a healthy economy.

During this stage, the stock market also experiences rising prices as investors grow in confidence, businesses receive more funding, and consumer confidence is at an all-time high.

The expansion phase is close to its end or overheating state when the economy begins to grow too fast, which is visible in the employment rate emerging below the natural rate and inflation increasing with stock prices rising to the point of being overvalued.

A country experiences a healthy expansion when the GDP growth rate is in the 2 – 3% range, inflation maintains its 2% target, and the unemployment rate is between 3.5 – 4.5%, with the stock market supporting a bullish run.

The saturation point or peak an economy reaches is the second stage of the business cycle. It is visible by the economic indicator's inability to grow further as it has attained its maximum growth limit.

During the peak phase, prices are at their highest, marking the reversal point in the trend of economic growth as consumers tend to make changes to their budget structure.

At the peak phase, all expansionary indicators begin to level as the economy prepares to transition into the contraction or recession phase.

The peak is visible graphically as the highest portion of the yield curve before the economy begins to experience a downward spiral characterized by a continuous decline in GDP growth below the 2% healthy mark.

Once the nation's economic numbers start growing out of their healthy ranges, the economy is most vulnerable as any factors can throw it off balance at this stage.

Companies expanding recklessly, overconfident investors, buying up of assets, and a significant price increase not supported by their underlying value are several factors that can throw the country's economy off balance in the peak stage.

With no room left for growth and nowhere to go but down, the economy falls into the recession or contraction phase after it has reached the peak and end of the expansion phase. It indicates that prices and production have reached their respective limits.

The recession stage comes after the peak phase and is evident by a rapid and steady decline in the demand for goods and services.

Producers in the economy do not readily notice this rapid and steady decline as they go about their regular daily production numbers. Thus creating a situation of excess supply in the market which tends to bring down prices abruptly.

Apart from prices, other positive economic indicators also witness a significant fall, such as income, wages, and output.

A recession graphically spans the time from the peak to the trough, as it is the period when economic activity is at its lowest.

During the recession, unemployment numbers rise, the stock market enters a bearish trend, and the GDP growth is below the 2% healthy value, forcing businesses to cut back on their economic activities.

For an economy to be in recession, the GDP has to have shown a significant decline for two consecutive quarters. It does not return to its original shape and size immediately after the recession phase is over.

After the contraction phase, the nation's economy experiences a significant rise in unemployment across all facets of the economy.

Besides the increase in unemployment, there is also a decline in the growth index for the country's economy, as is evident in its fall below the steady growth line. At this stage of the nation's economy, the country is in its depression stage.

The trough stage is the fifth phase of the business cycle. It is characterized by a decrease in the rate of adverse change in the nation's declining GDP until it eventually turns positive.

In economic terms, a trough represents the negative saturation point for an economy as there is an extensive depletion of national income and expenditure during this stage of the business cycle.

This phase begins when the nation's economy transitions from its contraction phase into its expansion and is represented graphically as the lowest point of the yield curve.

The rebound experienced during the trough phase is not always straight or quick as it continues steadily until the economy reaches full economic recovery.

After the through phase, a nation's economy enters the recovery stage. This stage is characterized by a significant turnaround in the country's economy, evident by its recovery from its negative growth rate.

Due to prices at their lowest point, demand starts to witness an increase. Consequently, supply and industrial production increase as the population's attitude toward investment and employment is now positive.

During the recovery phase, employment also begins to rise as the accumulated cash balances with the bankers make lending show positives.

Depreciated capital is readily replaced, providing unique opportunities for investment in the production process, which continues until the nation's economy returns to steady growth.

Economic indicators used to measure the productivity of a business cycle are very extensive as they are based on financial data of the nation's economy.

Usually, changing these indicator metrics could significantly point towards a potential shift in the business cycle. Leading economic cycle indicators get the most attention due to their tendency to predict a shift in advance of a business cycle.

These indicators work best alongside coincident and lagging indicators in the same framework. They provide a more thorough understanding of the true nature of economic activity.

Coincidental economic cycle indicators measure the aggregate economic activity that is subject to changes as the business cycle progresses.

As one of the three components of economic business cycle indicators, coincident cycle indicators are economic research tools that help measure the real income of consumers in the market, among other factors.

How is the Business Cycle Influenced?

The fact that periodic business cycles move in phases does not mean they cannot be influenced. Countries can manage the various stages of a business cycle through monetary and fiscal policies.

Generally, the government monitors the business cycle and devises a series of legislations to influence their country's business cycle, primarily around changes in tax and spending.

The Fed and the country's central bank use monetary policy tools that help implement needed changes to the country's interest rates.

This policy helps curtain lending and borrowing by businesses, banks, and consumers and influences the business cycle through rates that target inflation and unemployment.

When the country has slipped from its expansionary phase into a contraction phase, the central bank lowers its target interest rates to encourage borrowing in a request to end the contraction phase.

This policy by the central bank is termed an expansionary monetary policy. It is configured to be the turning point that pushes the business cycle back into the expansionary phase.

In unique situations, when a country's economy is growing faster than the country can afford, the central bank of such a country steps in. It offers preventive measures to contain the fast-growing economy.

The nation's central bank raises its target interest rates to discourage borrowing and spending, curbing the growth of the nation's economy.

This policy by the central bank is termed a contractionary monetary policy as its main aim is to contract economic activity spread and economic output to contain the economic expansion.

How Long Does a Business Cycle Last?

No defined time frame exists for how long a business cycle should last. It varies from being short for months to being long, lasting several years.

According to the U.S Government National Bureau of Economic Research, the time frame average for business cycles in America to play out is around five and a half years since World War II.

What Factors Shape the Business Cycle?

Ranging from technological innovations to wars, a wide variety of factors can shape the business cycle.

According to the Congressional Research Service, the critical influence remains on aggregate demand and aggregate supply within an economy. Contraction occurs when demand decreases and when demand increases, expansion occurs.

What was the Longest Economic Expansion?

The economic expansion that occurred between 2009-2020 in the U.S went down in history as the longest expansion and the latest for a record 128 months.

The U.S reached the peak of this longest expansion in February 2020. It was characterized by many variables in an economy fluctuating over time, leading to a shift in economic and non-economic factors.