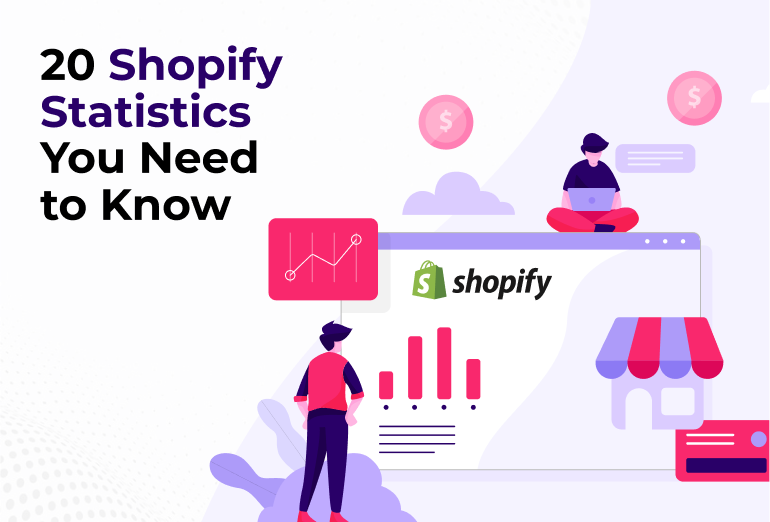 Shopify, a Canadian eCommerce company founded back in 2006, represents the perfect place for merchants to create and run their online stores. By paying a monthly fee, merchants who are interested in selling their products can gain access to Shopify’s services.

They’re also able to create personalized storefronts, which is an extremely helpful tool for those who are looking to start an eCommerce business, and also for those who want to provide their client base with a more efficient online shopping experience.

Shopify, as one of the leading eCommerce platforms available online, represents a titan of its industry. Chances are you’ve not only heard about Shopify, but you’ve probably also purchased something via a merchant using their eCommerce platform.

In this blog, we’ll go over some of the key Shopify statistics you should know in 2023, including Shopify usage statistics, revenue statistics, and other important facts and trends to be aware of.

Shopify ranks as one of the best eCommerce platforms currently available, and back in 2020, it generated a revenue of more than $2.9 billion.

According to Shopify statistics, its revenue for Q1 of 2022 was $1.2 billion, which represents an impressive growth of 86% compared to 2019.

2. Shopify has generated more than $307 billion in global economic impact

Experts predict that this number is only going to continue growing in the upcoming years, as more and more companies begin using Shopify to manage their online storefronts.

3. More than 5,000 businesses currently use Shopify Plus

Shopify Plus represents the enterprise version of the original Shopify platform. Currently, Shopify Plus is only available to merchants who have generated revenue between $1 million and $500 million.

The main difference between the standard version and the Shopify Plus version is the fact that it comes with a variety of improvements that could be enticing and helpful to the top sellers on Shopify.

4. Up to 80% of Shopify traffic comes from mobile devices

Mobile traffic accounts for up to 80% of all of Shopify’s website visits. This is why it’s crucial for merchants to provide their client base with an optimal mobile shopping experience.

This will improve the overall experience of your audience, and it will make your online storefront work on all devices to ensure a smooth and painless checkout experience.

Back in 2014, mobile visits accounted for just over 50% of all traffic, so that number has gone up by nearly 30%, and it’s probably only going to continue to rise.

5. Over 70,000 stores on Shopify sell clothing, making it the most popular eCommerce category

Selling clothing seems to be the most popular category among Shopify stores. Even though merchants sell a variety of products, fashion is still the top market on Shopify.

As of April 2021, there were roughly 70,000 merchants selling clothing via their Shopify stores. The second largest category on Shopify stores was home and garden, accounting for a little of 33,000 shops.

Only around 6,200 Shopify stores sell car and truck parts, according to numerous Shopify statistics. In the United Kingdom, beauty and fitness products account for approximately 11% of all Shopify stores.

6. Almost 500 million people purchased goods from a Shopify store in 2020

Back in 2020, this eCommerce platform generated almost $3 billion in revenue, as Shopify statistics show that there were almost 500 million people who purchased products from a Shopify store.

Statistics show that there are around 2 million people using Shopify every single day, making it one of the most popular eCommerce platforms currently available on the Internet.

Depending on the day, this number fluctuates, but the data seems pretty consistent, as it shows a very decent number of people who are browning and buying goods from Shopify storefronts every single day.

8. Shopify is the biggest eCommerce platform in the United States

As of September 2021, Shopify was used by approximately 29% of eCommerce websites, according to the latest Shopify statistics.

However, Shopify is not the only eCommerce platform available to merchants. Some of the best Shopify alternatives include Squarespace, WooCommerce, and Wix.

9. There are more than 1.75 million stores currently active on Shopify

The number of Shopify stores currently active on the Internet is astonishing – more than 1.75 million. You might be wondering – how many Shopify stores are actually successful?

According to a Shopify statistic, only around 2% to 5% of online stores on Shopify experience abandonment, but the reasons are currently unknown, as Shopify does not provide any data related to this.

10. Approximately two-thirds of all Shopify stores are based in the Americas

Currently, the majority of Shopify retailers are based in the Americas. In the US alone, Shopify has a market share of approximately 23%, which is more than any of its competitors.

As one of the top merchant solutions, the Shopify market share in the US is only going to continue growing. Many Shopify stores are present in other parts of the world, as the e-commerce platform is popular in the UK, Australia, and Canada too.

More and more merchants in the UK are launching their businesses online. Currently, there are approximately 20,000 Shopify merchants based in the UK. When it comes to e-commerce platforms in the UK, WooCommerce takes the first place.

With the number of Shopify sellers growing each year, it’s not impossible that Shopify will take over the first place in the upcoming years, with rising online sales around the world, according to various Shopify stats.

If you’re wondering just how many Shopify stores there are in England, the current number is approximately 20,000. Shopify statistics show steady growth year over year, so this number is predicted to increase dramatically in the upcoming years.

With lots of eCommerce sales, Shopify and Shopify stores are the second most popular ecommerce sales solution in the United Kingdom, with a market share of approximately 20%.

13. Shopify has merchants in more than 175 countries

Currently, Shopify powers online storefronts for merchants in more than 175 countries around the globe. Top Shopify statistics show that Shopify achieved up to $5 billion in online sales back in 2020.

Also, Shopify offers an affiliate program, meaning that affiliates can earn $58 on average in referral fees for each user they manage to sign up for a paid plan.

Additionally, Shopify’s gross merchandise volume was $43 billion in Q1 of 2022, which represents a CAGR of an amazing 57% compared to 2020.

Shopify also features a solution for businesses to get access to fast funding and flexible payments with Shopify Capital. Shopify markets fast, hassle-free applications, automated payments, and funds that become available in days to those who sign up.

15. One of the biggest companies that use Shopify is Tesla

To prove just how big Shopify is in the global eCommerce market, impressive Shopify statistics show that Tesla is actually one of the largest corporations that use Shopify to conduct their business online.

16. Merchants have spent more than $100 million in the Shopify app store to this day

When it comes to revenue per region, Shopify generated $2.15 billion in the USA, Canada, and Mexico, which accounts for 73% of total sales.

As of the biggest names in the eCommerce software market, Shopify also offers Shopify Payments, which is its own merchant solution. Shopify’s merchant solutions revenue primarily consists of collecting payment processing fees from all Shopify sales.

17. The majority of Shopify merchants are between 25 and 34 years old

These apps are customized plugins that can help you enhance the experience, design, and features of your online storefront. Certain apps are free, whereas some are paid.

Apps on Shopify have been proven to be beneficial, as they can help any merchant increase their Shopify sales. Users can add Shopify apps to their online store, and they can also create and sell their own apps.

19. Shopify users have an average of 6 apps installed

However, even though Shopify offers its own apps, the majority of merchants use third-party apps to add to their online storefront.

20. More than 80% of users on Shopify use third-party apps

Some of the most popularly installed third-party apps include Seguno for email marketing, Plug in SEO, Smile for rewards and loyalty programs, Kit for Facebook ads, and thousands more.

All of these third-party apps and integrations are extremely useful for merchants and their online stores, as they can help improve eCommerce website design, visibility, functionality, and ultimately sales.

Shopify fulfillment network was combined with Deliverr, an eCommerce fulfillment company based in the US, in hopes to compete with Amazon Prime’s next-day delivery and to further increase Shopify’s revenue.

As per Shopify CFO, Amy Shapero, this will be a huge benefit to all merchants using Shopify, as there are currently no other alternatives that are easily accessible.

How Can These Shopify Statistics Help You?

Numerous Shopify reviews show just how great this platform can be for those wishing to either start or better their eCommerce business.

Aside from its online storefront builder, they also offer other solutions, such as merchant services and fast funding for businesses with Capital. Even though Shopify is a paid service, they do offer a free trial for those wishing to try out all of its features.

As one of the best eCommerce website builders, this platform offers everything a business needs in order to get started with online retail. And if you’re not sure whether Shopify is the right choice for you, we’ve compared it to its biggest competitors:

Using these statistics and facts can help you make the best possible choices if you’re planning on building an online store to sell your products. Shopify represents a real contender and a force to be reckoned with, as it has an impressive market share worldwide.