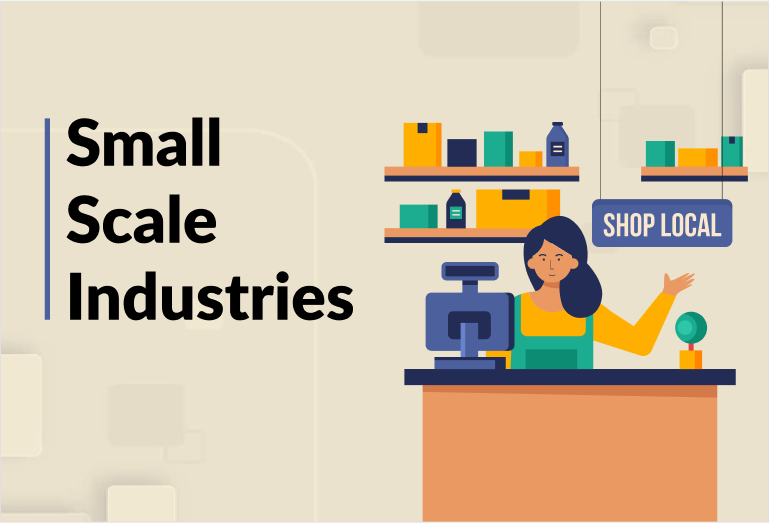 Small-scale industries serve as a major growth factor for most countries' economies from a financial and social point of view. They are a vital source of employment opportunities, food production, and manufacturing units.

These industries carry out their activities on a relatively smaller scale than large-scale industries regarding manufacturing, retailing, and exportation rendering services.

What are Small Scale Industries (SSI)?

Small-scale industries carry out their activities, such as manufacturing, production, and rendering of services on a small or micro scale.

Micro-scale industries are corporations, partnerships, and sole proprietorships that operate on a lower scale than other large industries.

Small-scale businesses tend to employ a small workforce, use smaller machines, and generate less revenue than normal-sized or large-scale industries. They depend on and apply for federal or state government support in terms of loans or preferential tax policies.

Big companies also depend on most small-scale businesses for some of their services and products to carry out their activities. Some ideas for a small-scale industry include bakeries, school stationeries, small toys, leather belts, and paper bags.

Characteristics of a Small Scale Industry

You must understand the various characteristics of small-scale industries and get a clear picture of them and their function.

A sole proprietor owns most small-scale industries, or it could be in the form of a partnership. Generally, such businesses are mostly run by a single person in most cases.

One of the most distinctive features of small-scale industries is that the ownership and the management of the business are vested in the hand of an individual who carries out both responsibilities.

The owner is vitally involved in the control and management of the day-to-day activities of the business.

Small-scale industries are labor dependent, and their dependence on technology is largely limited; instead, they rely more on human resources to complete tasks.

Since these industries operate on a small scale, they are subject to sudden and unexpected developments on the business front.

In a situation where the business experiences sudden changes, the impact is not always drastic because of the flexible nature of small-scale industries (SSI) units which makes them more adaptable to a changing business environment.

Small-scale businesses are designed to meet local and regional demand and cannot go beyond a particular sphere of influence in their environment.

Small-scale businesses use local or readily available resources for production, which aids the economy in full use of natural resources with minimum wastage.

Examples of small businesses under this category include engineering, food processing, and power looms.

Small-scale service industries refer to businesses that provide services such as maintenance and repair shops.

In this sector, you will deal with every small business that renders services such as reapers and maintenance, laundry, clearing, saloons, spas, and others.

Most big industries or multinational companies are involved in the manufacturing of finished goods. Ancillary industries mostly supply the parts these companies use to manufacture finished products.

Small businesses can manufacture machines and equipment for medium-sized industries or MNCs.

If the total export of a small-scale business exceeds 50% of its total manufacturing, it can be classified as an export unit. As an export unit, the business can enjoy certain benefits like grants offered by the government to industries in this category.

Most small-scale businesses in the cottage industry are operated through private resources. They require small capital investment and the use of indigenous technology.

Village industries refer to businesses located in rural areas that do not belong to organized sectors and produce various goods and services without electricity.

This small-scale industry primarily involves specialized activities like welding and casting. The iron and steel industry is popularly called a feeder industry because it supplies other industries.

The agro and rural industry comprises small-scale businesses directly or indirectly linked with agriculture on a small or micro scale.

Mining industries deal with extracting, managing, and processing precious minerals and other geological materials from the earth's surface.

When considering the different categories of small-scale industries, manufacturing industries are the fastest growing due to the natural supply of raw materials and the huge demand in public.

Small-scale ancillary industries in Hyderabad have huge employment opportunities due to the presence of multinational companies.

Here are some examples of prominent small-scale industries in India that have positively impacted the country's economy.

Potato chips and bananas are one of the most consumed food items. Small towns and rural areas are becoming major chips and biscuit production markets.

In South Asia, particularly in India, papads and fritters are one of the most lucrative small-scale businesses for entrepreneurs actively involved in the production process.

Papad’s shelf life is approximately two and a half to three months, and it can be produced in many flavors. The major buyers are usually hostels, hotels, and restaurants.

India has many dairy products, from milk to curbs to other processes like paneer (cottage cheese).

Since there is an increase in awareness of the various health benefits of quality dairy products, the demand for low-fat dairy products has increased as more people want to eat healthy foods.

In northern India, cottage cheese, popularly known as paneer, is one of the commonly used dairy products to prepare the food they consume.

The candle-making industry is one of the major small-scale industries in India that supports many women in the population by creating employment opportunities for those who have no work and are in poverty, especially in rural areas.

In India, lights and candles are a major part of many celebrations and festivals, from Diwali to Christmas. The growth in the candle-making industry in India has been tremendously high in both production and diversification.

Candle making has evolved. The process goes beyond straight cylindrical shape, and most businesses produce a range of scented candles.

Chocolates are vastly acceptable and loved by people of different ages, religions, and cultures.

Many small-scale businesses, mainly in hill station regions, produce a variety of chocolates that are loved and in high demand by most people in India.

With the increase in per capita income, chocolates are no longer considered luxury products but are consumed regularly by the average Indian.

Most people opt for organic products to keep their skin healthy. Small-scale industries that produce soaps and oils are in high demand and thriving in India.

There is a significant demand for cold-pressed soaps and oils today because of a substantial shift towards a chemical-free lifestyle among most people in India.

Many soap and oil businesses offer side products like perfumes and customized products to meet specific customers' demands.

Most Indian dishes depend largely on using spices to prepare them; hence the demand for spices will always be on the rise.

The spice market in India is huge; it meets local and international demands. This small-scale industry is highly profitable, growing at around 40,000 crores in annual turnover.

Role of Small Scale Industries in the Indian Economy

For developing countries like India, small-scale industries are a major source of employment. Without these industries, most of the population will be unemployed and in abject poverty.

Since most small-scale industries have limited technology and resources, they tend to rely on labor and human resources for their production activities.

Small-scale enterprises account for almost 40% of India’s total production of goods and services produced in India. The activities of small-scale industries are one of the major reasons the economy is growing and getting stronger.

Small-scale enterprises are the perfect description for the make-in-India initiative. Their objective is to manufacture products in India and export the products worldwide.

As a result of this initiative's demands, their products are exported worldwide, which results in more revenue generated.

India’s export industries majorly depend on small enterprises for their growth and development. Nearly half (45-55%) of all the goods exported from India are produced by small-scale industries.

Small industries have the opportunities to earn wealth and create employment opportunities that will help the community at large. Implementing the best business ideas in rural areas in India can help improve the country's social growth and development.

6. The Seedbed for Large Scale Industries

Small-scale industries perform the role of a seedbed for large corporations. They provide conducive conditions for proper growth and development for entrepreneurs.

Are SSI and MSME the Same?

SSI and MSME are the same. Earlier industries that were into manufacturing products, providing services, and producing goods on a small scale were allowed to carry out the Small-scale industries (SSI) registration.

The government and respective authorities passed the MSME (Micro, Small, and Medium Enterprises) Act in 2006. As a result, all the small and micro industries were placed under the MSME Act.

Because of the bill passed by the government, both SSI and MSME became the same. By implication, the government enlarged the scope of the SSI and termed it MSME.

What are Some Profitable Small-Scale Industries to Start a Business in?

Here are some profitable small or micro-scale industries for establishing a business.

Manufacturing Industry: Since most large industries depend on small-scale businesses in the manufacturing industry for some of their resources, you can venture into this industry because of its high level of profitability.

Export Units: Exportation is vital to a country's economic development and growth. It is a very profitable venture where you can sell your products outside the country and make more profit than you normally would if you sold them locally. Being in the export industry gives you a certain level of exposure that you would not have gotten if you did not venture into this industry.

Service Industry: Providing services is not limited to large-scale or medium enterprises alone. Most small-scale industries and business owners have acquired the skill and the equipment to render services and get paid for the services. Examples of services that small-scale businesses render include: laundry services, spa, hairdressing, maintenance, and reapers services.

Several government schemes provide the necessary support for these small-scale industries, which you can take advantage of by starting a business in any of these industries.

What Small Scale Business Should I Start?

Starting a small enterprise has various advantages for both the owner and the economy of the country at large.

Here are a vast number of profitable small-scale businesses you can choose from and start in your country.