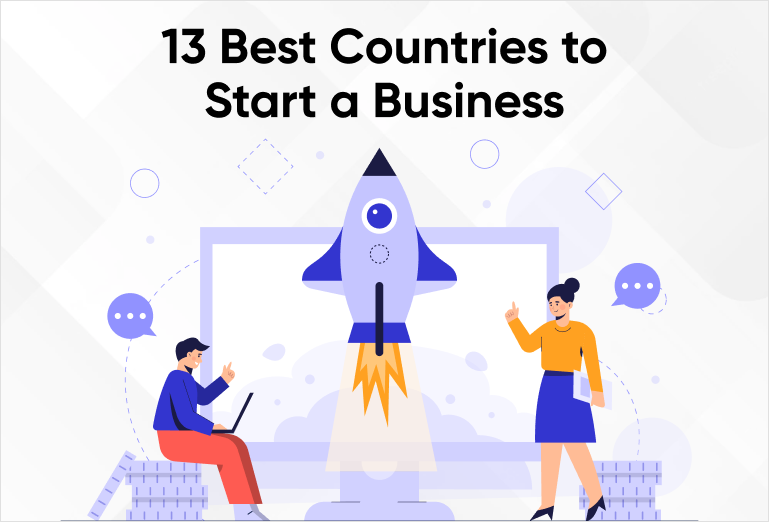 Successful entrepreneurs share essential characteristics and skills. Beyond having the right entrepreneurial mindset, the location of your business plays a huge role in determining your business’ failure or success.

Your business location is a major decision you do not want to take in a hurry without doing the needed research. Investors consider the location of your business as a major factor for investment.

Choosing the best country in the world to start a business requires you to check whether its social and political conditions are favorable for your business growth.

Countries have different tax rates, business climates, and legal and regulatory requirements; they may differ within countries. The rule of law and education systems are crucial in supporting entrepreneurship. Ignoring these factors is a recipe for disaster.

This article reveals 13 of the best business-friendly countries for launching start-ups.

In choosing from the list of countries available to you to set up your legal entity or business overseas, you need to weigh your options of what the best and worst countries offer and how it suits your business needs.

Most businesses and organizations avoid countries with unstable political conditions, such as a civil war or an oppressive non-business-friendly government.

Thanks to globalization, you can build an online business from any location. Your options are extensive beyond your country of residence or birth. Modern software tools like team communication tools allow you to run a remote and global team.

Five country attributes to consider when choosing the best country to locate your legal entity include:

Tax benefits contribute primarily to how conducive and appealing a country's business environment would seem to new businesses and minority investors.

Many countries usually opt for capital gains taxes as they reduce their marginal tax rates to spur economic growth. The idea is for this policy to increase the after-tax income available to its strong labor force to be spent back on the country's economy by buying goods and services.

Your final decision among the best countries to start a business should reflect a thoughtful consideration of how secure the legal framework of your last judgment on the nation is.

A legal framework is designed to establish entitlements clearly and transparently. It allows you to make claims and seek redress in cases where you can prove that your rights have been violated with the sole condition that you were previously entitled to the claimed benefit.

3. Proximity to Customers, Employees, and Investors

The strategic location of your new business needs to be chosen based on how close it is to your customer base, skilled workers, and natural resources, among other factors.

With proximity to these criteria, your new business is poised for economic growth in your specific industry and gain on the needed market size.

Freedom comes at a cost, and this is often so, especially when you find yourself in a country that is not your home country.

The easiest countries to start a business are characterized by the relatively easy access it affords both majority and minority business owners to operate without fear of being targeted.

A politically stable environment is one of the critical drivers of this level of personal freedom. Political stability goes a long way in affecting the economic progress of a country.

One of the significant characteristics that associate the worst countries with starting a business is how long it takes for a decision to be made and reflected due to the high bureaucracy of such countries.

Minor issues such as registering property or seeking construction permits from the government can be the decider in how fast new businesses can make effective decisions.

The low level of bureaucracy that characterizes the best countries to start a business would likely provide room for fast and effective decisions without fear of interference as there are guaranteed political stability.

Best Countries to Start a Business in 2022

Although many emerging markets are attractive for starting an online business, the best places to start a business remain development markets in Western Europe, Asia, and North America.

The best countries for launching a business in 2022 with crucial statistics to back the claim include:

UAE is the fifth largest economy in the Middle East and the second largest in the Arab Spring.

This country’s revenue is largely dependent on petroleum and natural gas sales proceedings, with tourism being its largest non-oil source of income due to the boom experienced in the construction sector.

UAE is quickly becoming one of the top countries for innovative software businesses, web designers, and online marketers.

The economy of Singapore operates as a free-market economy. Singapore offers a business-friendly environment to private and publicly state-owned companies.

According to the Ease of Doing Business Report by the World Bank, Singapore is one of the best countries to start a business.

The United States has one of the largest economies in the world, which the country attributes to its free market economy.

America focuses on artificial intelligence to drive innovation and job creation, making it the world's most technologically robust and innovative economy with abundant natural resources.

The Indian economy is a developing middle-income economy that faced a significant turnaround after the cold war that led to the adoption of a comprehensive economic liberal plan.

With its young population and relatively low dependency ratio, the future looks bright for India as an option to start your new business.

The Philippine economy is one of the best-emerging markets in Southeast Asia.

This Southeast Asian country focuses mainly on industrialization, with the bulk of its GDP exporting a wide range of finished products, primarily semiconductors, electronics, transport equipment, and agricultural produce.

Switzerland's economy is among the most highly developed free-market economies in the world, which is notable for its service sector.

Being a landlocked country does not limit Switzerland's economy in any way, as the Swiss banking industry and tourism are the two main sectors that contribute the most to its GDP.

The Panama economy is service-based, with the service sector accounting for more than 80% of the nation's Gross Domestic Product.

Panama, the first foreign country to adopt the U.S Dollars in 1903, has since grown to be among the best countries to start a business.

The Cyprus economy is a high-income economy and has continued to grow since the notorious Cypriot financial crisis that plagued the country between 2012-2013.

A member of the European Union, Cyprus has now built itself to be one of the best countries to start a business in this present time and age.

The Bulgarian economy operates as free market money with a relatively large private sector to its small public sector. Bulgaria’s currency, the Lev, is the strongest and most stable in Eastern Europe.

Bulgaria is a vital member of the European Union and other global world bodies.

South Korea has one of the fastest-growing economies in the world. Despite its cold war with North Korea, the South Korean economy has continued to show great strides in economic growth and development.

The German economy is one of the largest economies in Europe, which allows innovative manufacturing techniques to flourish.

Germany remains one of the largest exporters globally, especially in the IT sector, with a large inflow of innovative software businesses.

New Zealand’s economy is a highly developed free market economy. It is among the best countries to start a business due to its relatively large GDP for its population.

The large island nation of New Zealand is notable for protecting minority investors as it depends mainly on international trade for its revenue.

The British economy is a developed market-oriented and social economy running as a global economy dominated by the service sector.

Great Britain prides itself on the fact that it trades with the members of the European Union and other allies across the globe.