20 Social Entrepreneurs In India You Should Know in 2022 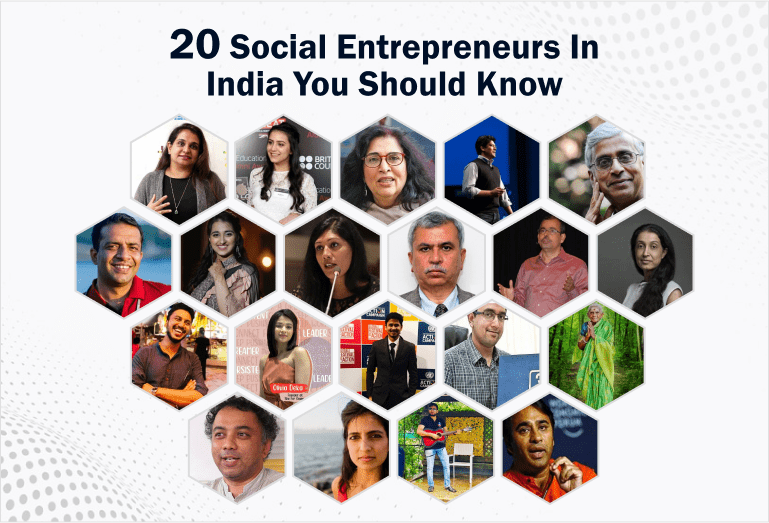 India is one of the best countries for starting a business. Thanks to a vast pool of innovative start-ups and successful Indian entrepreneurs, India is soaring in the economy and modern technological solutions and advancements.

Many of the world's most successful social entrepreneurs are Indians who have added value to their societies and communities. They add value through unconventional business models and running several non-profit organizations addressing social inequalities.

This article will cover top 20 successful social entrepreneurs in India.

Jeroo Billimoria is one of the successful social entrepreneurs in India with a knack for generating business towards alleviating societal problems or challenges.

She is a renowned social entrepreneur with many international NGOs (non-governmental organizations) supporting the country's social cause. Childline program is a social enterprise founded to cater to people's needs when a crisis arises in India.

Social enterprises like the Childline program render financial healthcare and police assistance to abandoned and vulnerable families nationwide. Childline has over 1,000 volunteers who provide 24/7 assistance to more than 115,000 children and their families.

Since Childline's establishment in 1995, it has worked tirelessly toward preventing exploitation, harboring, and child abuse to create positive connections with them. With Childline's intervention, many children and families in India have changed positively.

Jeroo is passionate about assisting the vulnerable in society and advocates for self-empowerment and women empowerment in India. She was honored with the Skoll Award for Social Entrepreneurship and a recipient of the Ashoka Fellow.

Ria Sharma is a social activist and one of India's most successful social entrepreneurs. The New Delhi-born graduated from Leeds College of Ark, the United Kingdom, after which she founded the world's first acid attack survivors rehabilitation and treatment center.

Sharma also has another establishment in her name known as Make Love Not Scars NGO, which came into existence in 2014. The NGO is a rehabilitation center for women in India who survived acid attacks.

She undoubtedly helped many young girls and women from stigmatization and restored their dignity. Sharma is an influential activist who advocates for social justice and believes in making a difference in the lives of everyone she assists.

Urvashi Sahni is a social entrepreneur and an activist. She is the founder and CEO of SHEF-Study Hall Education Foundation. Sahni is an Ashoka Fellow.

Study Hall Education Foundation (SHEF) is a social venture that awards students who are underprivileged and interested in studying engineering or business scholarships.

She was a corporate lawyer, but due to her tireless advocacy for social entrepreneurship, she quit practicing law for her educational career pursuit.

Founder and CEO of Redcode Informatics

Karthik Naralasetty is the founder and CEO of Redcode Informatics. He is a social entrepreneur that impacted the lives of Indians positively.

Redcode Informatics is a tech company that uses technological advancement to change the lives of poor people across the country.

The online platform aims to enhance access to information and technology solutions that will yield people's lives positively. As part of his achievements, he was one of the 30 under 30 social innovators in Forbes India.

Hanumappa Sudarshan is one of the good examples of social entrepreneurs in India and a reputable human rights activist.

Due to his tireless efforts in alleviating poverty among the poor people of India, he earned the Padma Shri Award. He also earned the Right Livelihood Award.

Sudarshan is the founder of Vivekananda Girijana Kalyana Kendra – a non-profit organization that is a driving force that provides quality education in rural India.

Anshu Gupta is a renowned social entrepreneur who founded a non-governmental organization, Goonj.

Goonj is a social organization that facilitates the redistribution of used items such as clothes from urban areas to low-income families and street children in rural areas.

Growing up in a middle-class family, he knew how the needy struggled with tattered clothes. His principal aim is to ensure equal urban-rural redistribution of items.

Goonj's relief and rehabilitation during disasters in various parts of India have earned him the Gupta Ashoka Fellowship and Social Entrepreneur of the Year award.

Aarushi Batra is one of the best social entrepreneurs in India. She is interested in providing food for many underprivileged households in India.

Hence, she founded Robin Hood Army, a volunteer-based organization that renders selfless assistance to the vulnerable, poor, and needy across India.

Batra founded the Robin Hood Army alongside her three friends who shared the same mindset as her.

The organization helps source food from weddings, parties, and even restaurants collective goods and repackage them following proper hygiene procedures, then give them to the needy.

Batra does not believe in past glories as she is always busy achieving incredible feats with her workers. Her actions have been a driving force that bridges the social inequities between urban and rural areas in India.

Founder and CEO of Frontier Markets

Ajaita Shah is one of the influential female social entrepreneurs in India who is the founder and CEO of Frontier Markets.

She is the nationwide President of Frontier Innovation. Her NGOs generate business towards sustaining low-income families and orphans nationwide.

The social commerce platform has distributed over 20,000 eco-friendly products and services to empower rural India.

Trilochan Shastry is one of the social entrepreneurs in India who founded ADR. His interest in political affairs has made him write many books promoting democracy and democratic reform across the nation.

Association for Democratic Reforms (ADR) is a non-profit organization established to reinforce and advocate for democracy across India through enhancing accountability, transparency, and good governance in India.

When we talk of successful social entrepreneurs in India, Santosh Parulekar is one of the few examples. He is hell-bent on providing job opportunities to unemployed youths across India.

Santosh is the founder of Pipal Tree. The company aims to provide formal training and reputable jobs across India.

Pipal Tree has empowered over a thousand people and is still counting in rural regions. The one center company plans to increase the number of training centers all over India in subsequent years to impart formal training to more people.

Parulekar has shown the power of social entrepreneurship by helping many youths in India.

Shaheen Mistri is a reputable social entrepreneur who founded the Akanksha Foundation. The foundation helps to cater to children in all spheres. Shaheen Mistri is committed to helping many young children.

Due to his poor background, she understands how young children were poorly treated and unable to achieve anything in life because of societal stigma.

Hence, she made it essential for her to find ways of helping these children and transforming them into young achievers. The foundation provides essential needs to children, such as healthcare services, education, and others.

Piyush Ghosh, the founder of Optimist Citizen, has a dream of changing the lives of Indians through advocating hope and positivity.

He is also the founder of India's first-ever only optimistic newspaper, Optimist Citizen. The newspaper is distributed for free at many locations in India.

Optimist Citizen has become a leading symbol of positivity throughout India. He advocates for economic citizenship education which gives a sense of belonging to people.

Founder of She for Change

Olivia Deka is an outstanding social entrepreneur who has given social entrepreneurship a new shape in India. She has worked tirelessly for over ten years to conceive a change all over India. Olivia then became the founder of the movement “She for Change.”

Olivia Deka created a campaign about the enlightenment and awareness of people against gender discrimination. Her skills and brilliant ideas had enhanced a positive change in the lives of Indians.

Founder of Step Up For Healthy India

Nivesh Raj is one of the renowned social entrepreneurs in India who is concerned about improving the health status of Indians.

He founded Step Up For Healthy India, a non-profit establishment that provides access to top-notch health care services in rural regions across India. Raj believes that proper sanitation is vital when trying to lift poverty.

As part of his achievements, he created a Leadership 30-a program that trains students to become tomorrow's leaders.

As a result, he was able to benchmark India around the seventeen SDGs established by the United Nations. The Leadership 30 program is one of a kind in India.

Besides that, Ignite-India also walks these students through the processes of achieving their full potential.

She addressed environmental and social issues through sensitization of students and educating women about societal issues like gender discrimination and inequality.

Saalumarada Thimmakka received many awards, such as the prestigious Padma Shri Award, the Global Social Venture Competition(GSVC) World Impact Award, and many others.

Founder and CEO of Selco

Selco has established more than twenty-five centers and installed more than 115,000 solar power systems in rural regions in India, such as Karnataka.

Akanksha Hazari is a reputable social entrepreneur. Due to her tireless efforts toward alleviating the global water crisis through her program, m.Paani, President Bill Clinton honored her with one million US dollars.

Gaurav Pokle is the founder and CEO of Waste Management Consultant, which the establishment is India's first-ever waste management plant and a non-governmental organization.

Vikram Akula is a social entrepreneur who rendered his help by facilitating financial institutions toward reducing India's poverty index, especially for Indian farmers.

SKS Microfinance helps create social capital for poor women in rural India. The microfinance project has become one of the biggest and fastest-growing microfinance institutions globally. He was honored with the Youth Finance International Award.