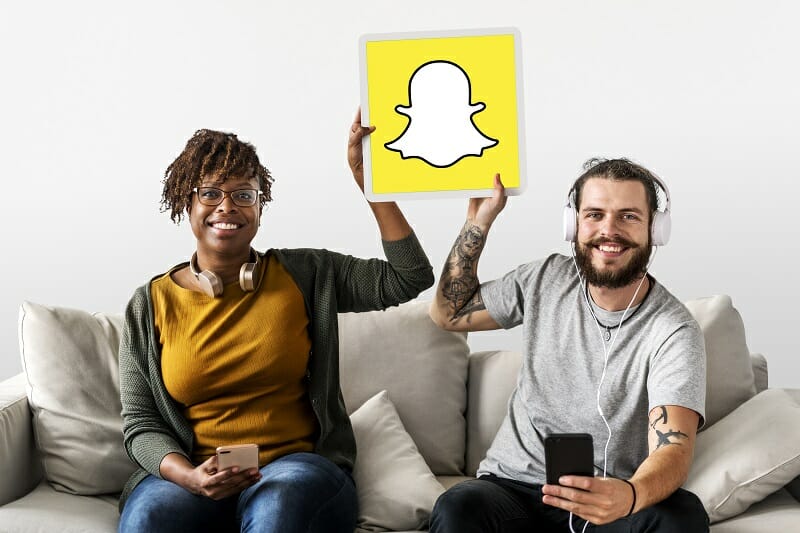 Snapchat is definitely one of the most popular social media platforms out there. Launched back in 2011, this social media app and photo-sharing app enables people to capture and save meaningful memories that can be shared with family and friends.

With over 300 million daily active users, aside from its primary purpose to connect people, it also represents a great tool for businesses to connect and engage with their audience.

We’re going to cover the most important Snapchat statistics you should know in 2022, along with some fun facts and a breakdown of Snapchat demographics.

1. There are more than 5 billion snaps created every single day, including photos and videos

Social media marketing statistics indicate that there are an astonishing 5 billion snaps created and shared each day, which includes both video content and photos.

That’s a very high number, but it’s not surprising, considering the fact that the majority of Snapchat users are younger people who want to share snippets of their day with their Snapchat friends.

2. Snapchat ranks as the 12th most popular social media platform in the world

Snapchat is, without a doubt, the most popular social media platform among younger generations, right after Instagram and TikTok.

3. Users spend around 30 minutes on the app every day

Statistics show that the average daily active user spends at least 30 minutes using the app. Considering the fact that 95% of users claim the app makes them happier, this is not at all surprising.

One of the top reasons why there are so many daily active Snapchat users is due to the fact that they use the app to keep in touch with family and friends, share images, and play around with lenses and filters.

While on their phone, the average person who uses Snapchat will open the app up to 30 times per day, according to Snapchat statistics.

Research has also shown that Snapchat suits the attention spans of Gen Z people perfectly, as they’ve been described as having slightly shorter attention spans compared to older generations.

5. The release of lenses doubled Snapchat downloads in 2019

Snapchat’s own version of filters, also known as lenses, was released back in 2019. They made the platform go viral almost immediately.

According to online statistics, the number of the app’s downloads almost doubled once this particularly interesting feature that uses AR was released.

6. People who use Snapchat are 60% more likely to make an impulse purchase

Statistics show that millennials and Gen Z people have a combined spending power of more than $1 trillion.

Combined with the fact that they’re more likely to make impulse purchases, this means that Snapchat is a very space for marketers who want to show off their services or products to younger generations.

On the other hand, all users combined have more than 4$ trillion in global purchasing power, giving even more reason why businesses and brands should consider using Snapchat as one of their marketing channels.

Ever since its launch in 2011, Snapchat and its advertising abilities have caught the eyes of numerous brands and marketers, making it a very popular part of any marketing strategy.

Snapchat statistics show that up to 35% of Snapchatters will create and send snaps of services or products they’ve received, giving brands and businesses even more exposure.

This increase in online visibility means that any business that invests in marketing via Snapchat can expect to see an increase in customers and, ultimately, revenue.

9. There are more than 35 million businesses currently listed on Snap Maps

Statistics show that more than 250 million Snapchatters use the Snap map every single day to discover new places.

This gives businesses a very good reason to list themselves on Snap maps, as they’ll be more likely to catch the eye of Snapchatters, bringing in more customers and increasing profits.

10. The reach of Snapchat advertising audiences makes up 8.4% of the population aged 13 and above

Snapchat is definitely popular among the younger generation. Snap ads are the perfect choice for brands whose target audience is people in the age groups between 18 and 24.

11. Around 64% of Snapchat Ads are viewed with sound on

Statistics show that despite all the photos shared on the app daily, video content is still more popular, especially when it comes to advertising.

More precisely, up to 64% of users view Snapchat video ads with their sound on, which actually makes a big difference.

Whether it’s including a catchy song or an interesting customer review, video content with sound is definitely the way to go.

12. More than half of Gen Z users have ad recall after watching 0-2 seconds of an advertisement

Ad recall is an important marketing metric that brands can use to measure and see the impact of their campaign on their target audience.

According to the latest Snapchat statistics, up to 55% of Gen Z users have ad recalls, even though they’ve only watched 2 or less than 2 seconds of an ad.

This is double the ad recall among those in the age group 40 or older, meaning there’s more reason to advertise using Snapchat if younger generations are your goal audience.

The number of Snapchat users per day exceeds 319 million, which is a huge number of daily users compared to any other video messaging app.

Snapchat statistics also indicate that the number of Snapchat users has increased by 20% year-over-year.

14. The Snapchat app has more than half a billion monthly active users

When it comes to monthly Snapchat stats and just how many users there are on a monthly level, Snapchat reports more than half a billion users.

As for American Snapchat users, there are currently around 87 million people using Snapchat.

15. 34% of people stated that they used Snapchat more than other social media platforms while with friends

Snapchat statistics indicate that people use Snapchat more frequently while out and about with friends, which is likely due to the fact that it’s a very popular app for capturing memories and fun moments together with friends or family.

Additional Snapchat stats reveal that up to 19% of Snapchat users use the app while shopping and up to 14% during social gatherings and events, which is a bigger number of Snapchat users compared to other social media platforms.

India dominates the Snapchat market share, with almost 120 million users, closely followed by the United States, which has around 107 million users as of April 2022.

The following three countries with the most Snapchat users are France (24.7 million), Pakistan (22.25 million), and the United Kingdom (21.35 million).

17. Approximately 82 million users use Snapchat every day in Europe

After North America, Europe is Snapchat’s next largest demographics, with approximately 80 million users. It is also extremely popular in the rest of the world.

The social media app, developed by Stanford University Students back in 2011, still mostly appeals to people under the age of 35.

As one of the most popular apps worldwide, Snapchat has more female users as of right now. The gap is not significant, but it used to be in the past.

Back in 2013, approximately 30% of its total users were male, whereas today, the number of Snapchat users who are male is much higher.

It’s no secret that Snapchat usage is among the most popular social networking apps for younger generations. After all, the number of Snapchat daily video views is more than 18 billion.

Similarly, the number of daily active users is also increasing, and predictions state that it’s not going to slow down any time soon.

Back when Snapchat was founded in 2011, the app was initially called Picaboo. The app began being noticed by internet users in July, only to be renamed in September of the same year.

21. The founders of Snapchat tried 34 projects before coming up with Snapchat

It’s interesting to learn that the founder of the popular social media app tried 34 projects prior to coming up with the idea of Snapchat.

Snapchat revenue continued growing throughout the years, reaching a peak of $4.12 billion back in 2021 and $1.5 billion in the fourth quarter, ranking as one of the top-grossing social platforms.

Both Google and Facebook tried to buy Snapchat back in 2013. In fact, Mark Zuckerberg even tried to acquire the app twice.

He initially proposed a $1 billion contract, which he later increased to $3 billion, but Snapchat refused both offers. The market value of the app was around $28 billion, almost 3 times more than what Zuckerberg offered.

23. More than 2 million snaps are being sent every single minute

If you’re wondering just how many snaps are being sent each minute, the latest data shows that the number is more than 2 million.

According to statistics, the average user opens the app’s camera up to 30 times every single day, trying out one of the million lenses Snapchat offers.

How Can These Snapchat Stats Help You or Your Business?

Snapchat is and will continue to be one of the most popularly used social media apps that feature an augmented reality and also the ability to send a photo, video, or even a private message to your friends.

The popular app was quick to rise to fame, especially among Gen Z and Millennials, which could be linked to the fact that it had something new to offer, being a pioneer in popularizing the use of augmented reality through filters, or lenses, as they’re called.

Currently, North America is one of its biggest markets, but it’s also extremely popular in the rest of the world. With many features, such as Snapchat Discover, the visual nature of the app is the most appealing to younger generations.

Snapchat is not only great for personal use. It is also an important advertising platform that can be used to promote services or products to a wider audience, which is why it has caught the eyes of many brands, marketers, and advertisers around the world.

One thing is certain – all of these statistics show that Snapchat is definitely there to stay. Even though the app saw a slight drop in users in 2018, it managed to get back on track in terms of both user number and revenue.