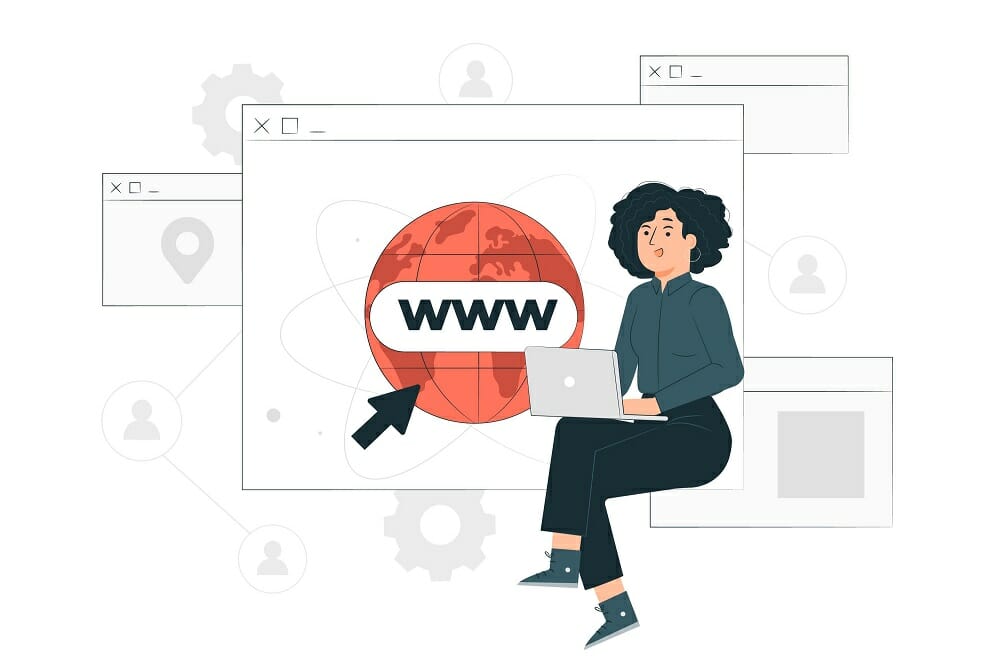 From communication to education, economy to commerce — the internet touches every aspect of how we live, work, socialize, shop, and play. In just the past few decades, the internet has changed our lives for the better. But how many internet users are there, which regions have the highest penetration, how businesses are transforming using the internet, and how many websites are there?

Scroll down to find the latest internet statistics and discover the number of internet users worldwide, top use cases for individuals and businesses, online purchases and ecommerce market, and more.

1. There are over 5 billion active internet users, 63% of the global population.

The audience is forecast to reach 5.6 billion users by 2025, owing to the continuous development and modernization of previously-backward regions. Plus, Datareportal’s internet usage statistics report that two-thirds of the world population will be online by 2030.

The average rate of internet users is growing at 900,000 users per day. This suggests that every second, the internet sees ten new users.

The average growth rate of internet users is 8.27% (since 1995), which is 8x faster than the total population growth, which stands at 1%.

2. Europe has the highest internet penetration rate, with 87% of the population having internet access, and the global average stood at 62.5%.

Statista’s internet usage statistics indicate that Europe has the second-largest internet user base, with over 750 million users.

Also important to note is that the global internet penetration rate is 62.5% (as of April 2022).

3. 99% of the people living in Denmark, the UAE, and Ireland have internet access, whereas 0.0% of North Korea’s general population has internet access.

However, the Internet World Stats suggests Kuwait (99.6%) and Qatar (99.6%) have the highest penetration rate.

The UK, South Korea, and Switzerland reported an internet traffic rate of 98%.

At the same time, China (1 billion), India (658 million), and the US (307 million) are the leading countries with the highest number of internet users.

The least developed countries like Eritrea (8%), South Sudan (8.3%), and North Korea (0% among the general population) have the lowest internet penetration rate. North Korean citizens have access to their own national intranet.

4. An average person spends 6 hours and 56 minutes on the internet each day.

The average time spent online by internet users aged 16-64 years has remained relatively constant since 2013 (6 hours 03 minutes). Be that as it may, this suggests that internet users spend 40% of their day online on average.

Still, the amount of time people spend on the internet daily is climbing year-on-year (0.4% increase from the last year).

54.2% of the world's total population (4.65 billion) are present on at least one social media platform. The average daily social media usage is 2 hours 27 minutes.

In fact, only 4.1% of internet users in the world do not use any social media site.

More than half (54%) of women use mobile internet (around the world). Still, there is a persistent gender gap, especially in low-income countries. While affordability is the reason for fewer women using a mobile phone, the primary reason for less mobile internet use by women is illiteracy.

GSMA Intelligence internet usage statistics highlight that the South Asia region has the widest mobile internet gender gap at 51% (down from 66% in 2017). Moreover, women are 8x less likely to own a mobile device and have internet access than men.

And the global average mobile download speed is 55.5 Mb/s for downloads and 12.65 for uploads. Moreover, the latency in mobile internet came down from 42 ms to 37 ms.

Jersey takes the lead with a stunning 274.3 Mb/s average download speed for fixed broadband. Jersey is also the first country to upgrade its telecom infrastructure to pure fiber (Fiber to the Premises) optic communication delivery.

The high cost for data in these countries results from poor fixed-line infrastructure. Whereas in some countries like Canada (US$ 12.55), the high price for data is because of a lack of competition. Bell Rogers and Tellas own 82% of all wireless services in Canada.

At the same time, India (US$ 0.09) has the cheapest mobile data rates, owing to the high competition in the Indian market.

Only 31 countries have affordable mobile broadband costs. The affordability threshold is calculated based on the average income and internet data costs. (Affordable if an individual has to spend only 2% of the income for meeting personal data needs).

8. 61.1% of internet users use the internet to find information. More than 4 in 10 use it for education and study-related purposes.

According to Oberlo's internet use statistics, more than 6 of 10 internet users access the internet to find new information, making it the most widespread internet use.

The second most popular reason users go online is to connect with their friends and family (55.2%), while 52.5% of users access the internet to keep in touch with the latest news and events.

Moreover, more than half (51.5%) use the internet to access video streaming platforms (watching TV shows, movies, and videos), ranking as the fourth most popular reason in the top use case list. Equally important to note is that 45.8% of users go online to research a product or service.

42.5% use it for education and study-related purposes. More and more internet users of all age groups are enrolling on online course platforms and learning new things. In fact, eLearning statistics report that the eLearning industry was valued at over US$ 250 billion in 2021.

9. Small businesses that use the internet grow 2x faster than those that do not.

Additionally, the same report from Tandfonline on Marketing Technology highlights that the internet has the potential to transform small businesses by bringing in new technologies like email marketing software for customization. And CRM tools for customer relationship marketing and leading to better business-to-business collaboration.

The ecommerce market and new technologies will allow small businesses to grow twice as fast as those that do not have a web presence.

Thirty years later, there are over 1.88 billion websites (unique hostnames), and the count is increasing quickly.

Here are some other interesting statistics from Statista on how many websites (since the dawn of the internet):

Building a website requires the use of a dependent web hosting platform. Web hosting services make the website accessible to users around the world.

12. Google Chrome is the leading desktop browser, with a 66.64% market share.

Google Chrome is also the leading browser among mobile internet users, with a 61.93% market share. Apple's Safari is the runner-up, with a 25.56% market share.

Even looking at the combined market share, Google's Chrome for Android and Chrome 91.0 account for 57% of the overall web browser market, ahead of its competitors.

About 60% of all Google searches are made via smartphones. Moreover, the “near me” searches and searches for local businesses on Google grew by 250% between 2017 and 2019.

Furthermore, Google has remained the most popular search engine (market share > 85%) since it was created in 2008. Its parent company, the Alphabet, is one of the biggest internet companies responsible for services like mail, productivity tools, enterprise products, mobile phones, and other ventures.

14. Internet users spent half of their online time on mobile devices in 2021.

Around 4.32 billion people, most internet users, use their mobile devices to go online. Plus, internet usage via mobile phones has experienced constant growth since 2013. Moreover, smartphones account for 80% of all mobile phones.

According to Statista's report, mobile internet traffic has experienced a 5% increase since 2020. Still, 91% of small business owners do not optimize their websites for mobile devices.

However, Shopify's ecommerce statistics reveal that at least half of the mobile users access online shopping websites instead of downloading the app.

Still, 50% of online shoppers prefer downloading the app. This indicates that online retailers have to focus on both fronts — optimize the website for mobile devices as well as build a quality shopping mobile app.

Nevertheless, where 91% of small businesses haven't optimized their website for mobile devices, only 32% have a mobile app. The good news is a vast majority (42%) of the small business owners plan to build a quality app by the end of 2022.

Additionally, 58% of online shoppers like to purchase using the mobile app or website again if the companies remember their past behaviors and interests. So, small companies should start adopting reliable marketing automation tools to automate monotonous marketing work, nurture leads, and drive revenue.

OpenSignal’s internet statistics show that South Korea is the only country to score over 50 Mb/s in Mobile Internet Download Speed Experience; the global average is 20 Mb/s. (Wikipedia's stats set the bar high — 55.5 Mb/s).

However, it is essential to note that the world's biggest cities have higher mobile download speeds; the average is 60 Mb/s. (Based on OpenSignal's report).

The 5G, the fastest-deployed mobile internet connection technology, is forecast to cover 75% of the global population by 2027. In terms of 5G coverage, North America and some Asian countries take the lead.

18. Internet users spend 143 minutes online via their mobile phones and 38 minutes via their desktops.

19.  Web-based activity accounts for only 1 of every 13 minutes of mobile traffic.

The average time that the users spend on their smartphones is 4 hours and 48 minutes. However, the majority (89.01%) of mobile internet traffic comes from app activity.

20. There are over 4.65 billion active social media users worldwide, equating to 58.7% of the population.

However, Kepios points out that the numbers may not be accurate, given duplicate accounts and the presence of individuals on multiple platforms. Also important to note that most social media platforms restrict individuals less than 13 years.

Needless to say, 80% of social media users access the platforms via respective mobile applications only.

Social media ads accounted for 35.5% of all digital advertisements in 2021. Ad spending on social media is forecast to reach US$ 173 million in 2022.

The Future of the Internet Will Be Bigger, Faster, Safer, and More Private

Nineteen million people in the US do not have internet access, and 47% of the world population hasn’t seen its magic. Experts estimate that it will take 20 more years before the entire world has internet access. Nevertheless, every second, more and more people gain access to the internet.

Moreover, with the FTTB and 5G, the global average for fixed broadband and mobile connections is improving. Retain that speed is a major factor among marketers; as the global internet speed increases, websites and developers can add more content to the website and improve customer experience.